Last night I took pictures of a classmate for a project of hers. I had the studio checked out until midnight, so Elliot met me there are we messed around with the lights for a bit. It was so so much fun! I had forgotten how much I missed the studio, and missed watching Elliot go crazy, haha. So many laughs and so many cool pictures. More to come most likely, but this was for sure one of my favorites. But, we didn’t get done until after 11:00 and then hadn’t had dinner yet, which took until well after midnight, so needless to say I was too tired to edit/post last night.

Three food pictures in a row, wow. I had an absolutely awful day, with just about everything going wrong, and was not in the mood for taking a picture. Elliot had some beer, and he cracked one open for me right as I was telling him how I didn’t know what to take a picture of. He pulled out his beer mug and poured my beer in it, and then opened up his peanuts and arranged this little set up. He also went to grab his flash so I had some interesting lighting at least. I am actually mostly happy with this shot, despite everything.

That was a long, and poorly told story, I apologize. 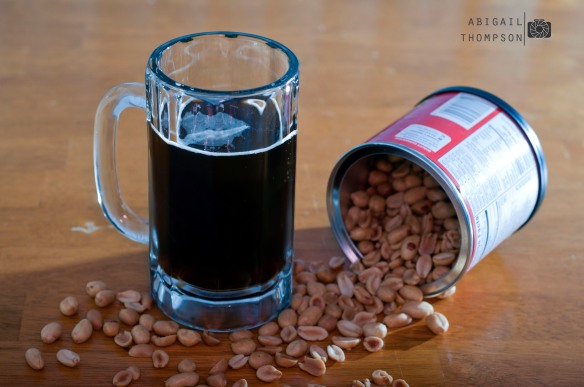